Sooni Taraporevala grew up next to a fire temple. Fire temples, or agiaries, are Zoroastrian places of worship, off-limits to non-Parsis. Taraporevala, who is Parsi, frequently has to clarify their function to non-Parsis, explaining that contrary to whatever associations the name conjures, fire temples are actually dark, cool and tranquil places, devoid of any bizarre ceremony. 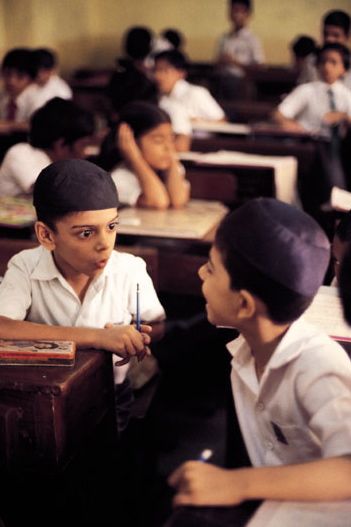 And she has made it her career to convey truths and stories in highly creative ways. Over the course of two and a half decades, she photographed India’s Parsi population and documented many such spaces little known outside of the community. The result is a monumental book, Parsis – The Zoroastrians of India, that tenderly chronicles family life, faith and friendship. She calls it “a photographic journey”, and it does indeed depict a dignified world that may be impossible to recreate in a decade’s time: India’s Parsi population currently stands at approximately 70,000 (out of a global population of just 100,000) and is shrinking. Yet in spite of its small size, the Parsi community boasts many seminal figures, including the conductor Zubin Mehta, author Rohinton Mistry, the industrialist Tata family, and Queen’s Freddie Mercury.

Taraporevala’s first screenplay, Salaam Bombay!, was directed by her longtime creative collaborator Mira Nair, and the film received an Oscar nomination for Best Foreign Film in 1988. She has since penned the screenplays to Mississippi Masala, The Namesake, and wrote and directed her own feature film, Little Zizou, in 2009.

We met her at home in her beloved Bombay (“will the city ever be exclusively known as Mumbai to you?” “Never.”) and talk about the natural overlap of mediums, washing dishes at Harvard, and the dangers of militant cultural preservation.